So, even though this page is about Cyprus, in reality it's more about Paphos, with a bit of the surrounding area and towns thrown in.

While it used to be the Capital of Cyprus (up until about 200AD), Paphos is not a big town. It has a population of approximately 33,000, and can be found in the South West region of Cyprus. It's location on the coast makes it a very popular tourist destination, especially British and (lately) Russian visitors.

Although not a large town, it has more history than most Cities, with several archaeological sites dotted about the town and region. It is also easily accessibly, having it's own airport and, as public transport is so good, it's conveniently located to explore the whole South Western region of Cyprus. 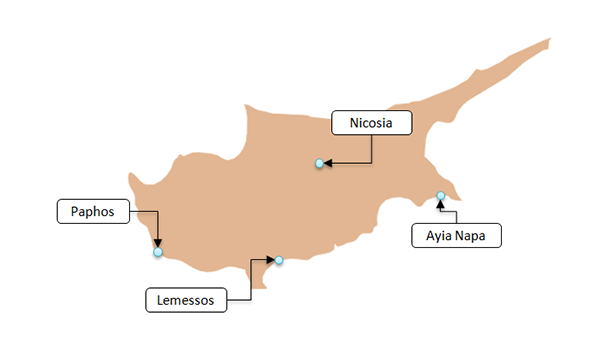 We spent a week in Paphos, staying in a very comfortable apartment not far from the centre of town, but definitely closer to the beach, and right next door to Kings Avenue Mall. This was booked separately from our flights, and actually resulted in a pretty big cost saving vs paying for an all-inclusive holiday!

We'd planned on hiring a car for a couple of days while on holiday, but decided to do it straight after landing, as it meant we wouldn't have to wait for the next airport bus - having missed the one we wanted. We ended up with a Nissan Micra from a local company, costing us €90 for 2 days. This is pretty dear, in my book, but at short notice it was the cheapest option available. Anyway, the car itself was pleasantly surprising - besides a truly shitty automatic gearbox, it wasn't a bad drive at all. 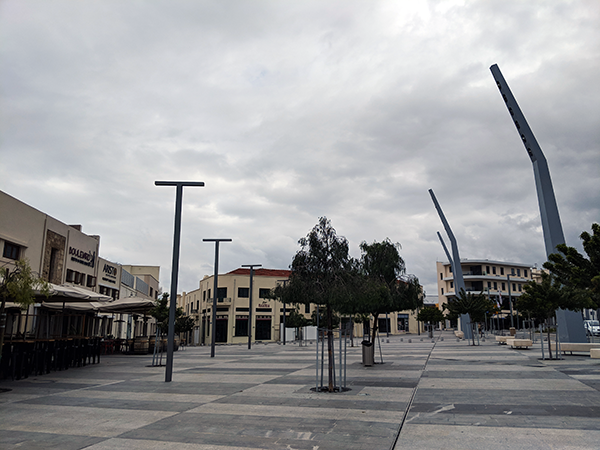 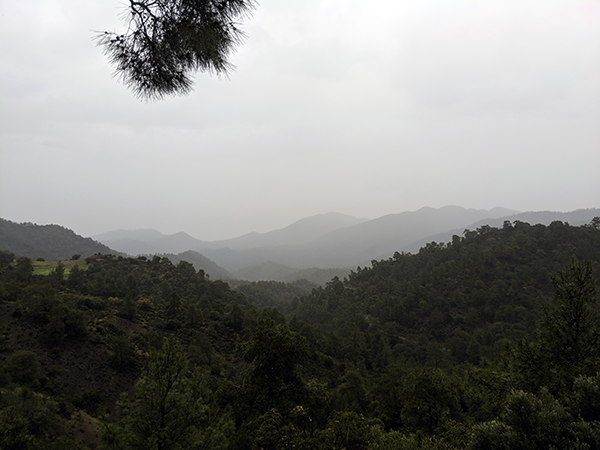 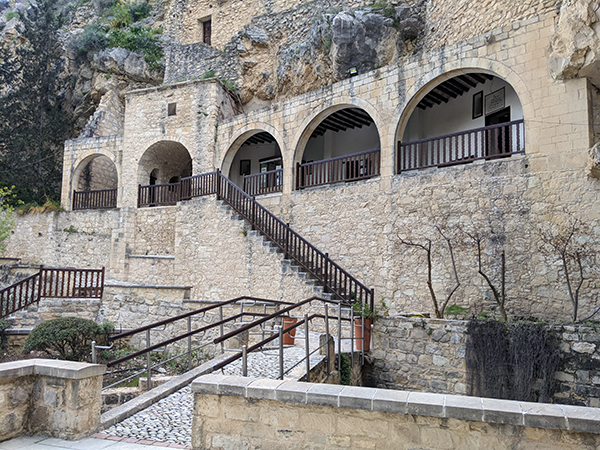 Having the car gave us the opportunity us to explore the region outside of Paphos, and we made good use of it! Our first day on the Island was spent travelling East - first to Petra tou Romiou (Rock of Aphrodite), which is only a 25 minute drive from Paphos, and then on to Lemesos for a visit to the Marina and lunch - you can see more information on each attraction in the posts at the bottom of the page.

The weather on day 2 was atrocious - it was absolutely chucking it down. As it was our last day with the car though, we were determined to make the most of it anyway. We travelled up into Paphos Forest, and ended up loving it. 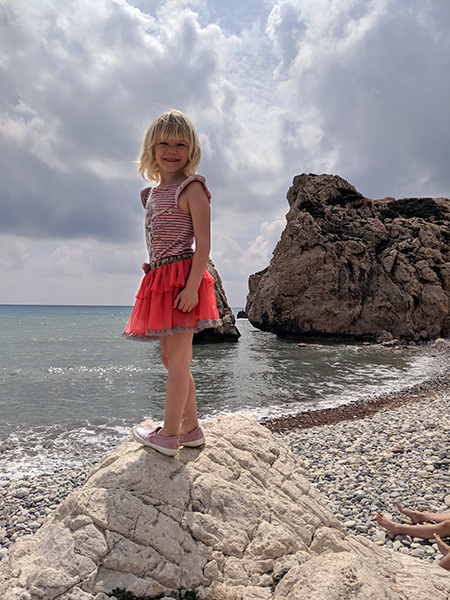 The route up and down is spectacular, full of windy, curvy, s-bendy & blind corners. Around each corner is a new panorama, a new excuse to stop and take a picture. A word of warning - the roadsides are steep and rocky, and there are many small rockfalls that happen, especially when it's wet.

Towards the top of the route you reach the mountain cafe, which is a very basic self-service room with a view. They do serve traditional coffee though, which is a must!

Over the course of the next few days, we managed to see several of Paphos' own attractions while exploring the town in greater depth. it's a wonderful town; very clean, very friendly, and it does feel very safe walking around. There's plenty to do in Paphos itself, including the Archaeological site, Old Town & Coral beach.

We spent a lot of time on the beach as well (Several of them) - mostly they're rocky, or covered in seaweed, but a closer look reveals an amazing fossil record in almost every rocky outcrop, which in itself is quite astonishing.

Looking back, it's one of the nicest holidays we've had in years, and we'll definitely be returning to Cyprus at some point in the future.

We spent a few hours in Lemesos while staying in Paphos, and in fairness, the biggest take-away from our visit was how unbelievably different the two places are! Where Paphos seems well maintained, clean and safe, Lemesos was dirty & run down.

Except for the Marina, that is, which was luckily the one place we really wanted to see. 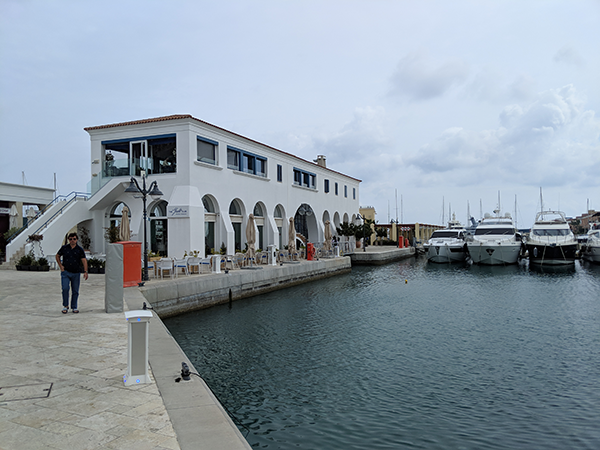 We ate at HOBO Mediterraneo, which served us marvellous Seafood followed by an unexpected 20% discount for paying with Mastercard, and then took a walk among the super-yachts lining the marina (most of which probably cost more that 5 times the value of my house!), and ended up going past one of the larger souvenir shops before heading back down the road.

There are several Legends telling the history of Aphrodite's Rock, ranging from it being the birthplace of Aphrodite, to it being the site of a great battle between the hero Basil and the Saracens. Whatever its history might be, it's a great place to waste away a morning :)

There is ample parking available, and a curio shop / cafe on site. To get to the beach from the parking, you need to go down the stairs next to the cafe, and through a narrow tunnel passing underneath the main road.

The beach itself is nothing but stones, but they are the nicest kind - Smooth and round, perfect for walking on without hurting your feet, and great for building stone pillars (and a wee stone hut, in our case). There are many rocky outcroppings too, with most being quite easy to climb.

It's a very scenic beach in general, but the best view is the one from the top of the Rock of Aphrodite itself - it's a bit more of a challenge to get up this rock - it's pretty steep, and it's BIG - but once you make it, the panoramic views across the ocean are spectacular.

The Rock of Aphrodite is an easy 25 minute drive from Paphos (if you're driving, that is) and is also accessible by local transport - the bus to Lemesos stops at the attraction.

The Archeological Park covers a large area close to the Marina. It's easily accessible, and has many points of interest to find and explore. Visitors are able to access all the ruins, which is quite cool - there are no barriers preventing you from clambering up the rock walls, or exploring the dar cellars.

Apart from the old building ruins, there are a couple of displays featuring very nice Mosaic's, dating back to the 2nd Century AD.

The entrance is right on the Marina, and the entrance fee is quite cheap.

If I have one complaint, it's that the Visitor guides are quite poor - the map is not very detailed, and none of the routes are marked on it - means you have to do a fair bit of guess work to find the relevant site! 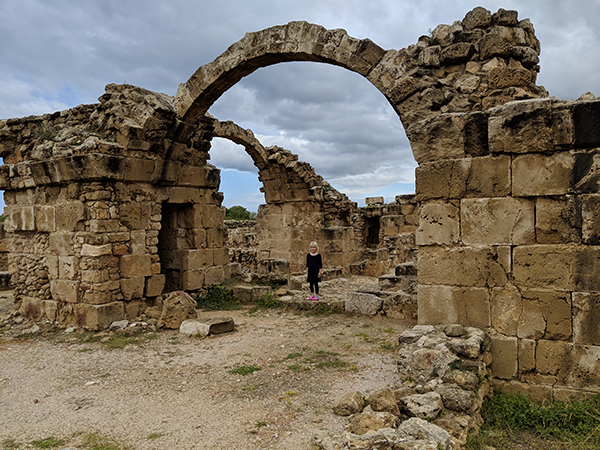 It was a very last minute decision to go on the Boat tour; We were waiting for the bus back to the airport on our last day on the Island, and needed something to pass the time.

As a whole, it was pretty fun, but there was very little sea life. Actually, I don't recall seeing anything! 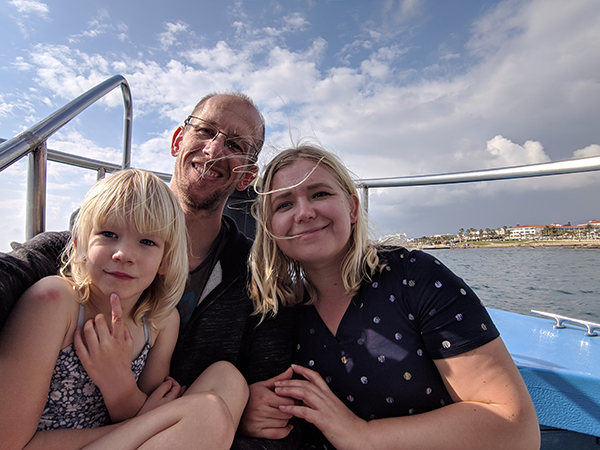 The boat we went on had a (dirty) glass bottom, and combined with the fact that the water was quite murky, made it hard to see even a meter or so down.

That said, it was great being out on the water (Sofia loved it), and our guide was friendly enough. If you're there in the Summer, this would be a great activity.

20km up the West coast from Paphos lies Coral Beach, a popular tourist area with some lovely hotels, including the Coral Bay resort. We headed up this way for an afternoon, mostly as Asia had heard it was worth seeing for the beach.

Coral Bay does have a lovely crescent of sandy beach, protected on both sides by cliffs. As such, it pretty sheltered and catches the afternoon sun quite nicely. We had a great time playing on the beach and exploring the cliff edges for shells and treasures (including fossils, of which there are plenty!

Once we were done on the beach, we popped in at the Coral Bay resort for a beer and a basket of fries. Very comfortable indoor seating area, and they were quite happy to have visitors eating in (this was before COVID, after all.

All in all, a very nice day out if you want to explore more of the local area.