The 500 was a trip my Wife had wanted to do for ages, and we eventually did it (most of it, anyway), in April 2017. I say most, as we did end up cutting it short by a day, the weather was just too poor in the end. But read further to hear about our adventures till then.

It was over the School holidays, so we left on the Thursday night (I’d taken Friday off), and spent the night at a friend’s place in Inverness. Its a great way to split the trip from the East Coast, as it’s a long drive Cross-country!

We left bright and early on Friday morning, heading to Applecross via Lochcarron (approaching from the Southern mountain pass). The drive itself was pretty peaceful, and beautiful (This is Scotland, after all) until we hit Lochcarron, where we stopped for a snack and to stretch our legs. The village is pretty sweet, just a collection of houses, Tea-Stores & touristy shops (with some very friendly locals) on the shores of the Loch. After our stop though is where the journey started to get a bit hairy…

The drive to Applecross across the peak of Bealach na ba is not for the faint-hearted! A series of switchbacks, in our case rising into a thick fog, meant that every corner was a potential accident waiting to happen, as we rose higher and higher into the heavens. The view initially was spectacular, especially looking South, and I can only imagine how beautiful it must be from the top! By the time we reached the top, visibility was maybe 10 meters, and then we had to do it all over again on the way down. 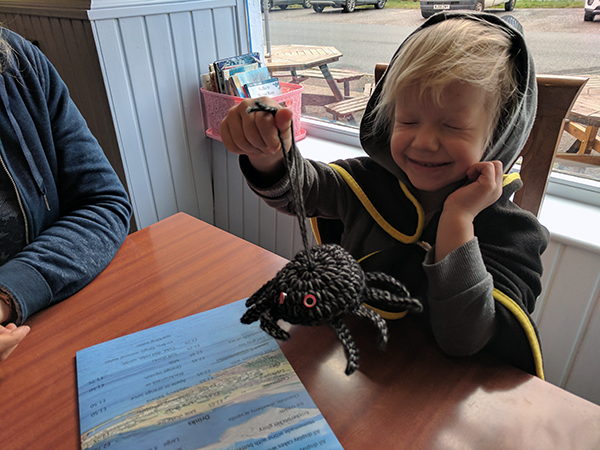 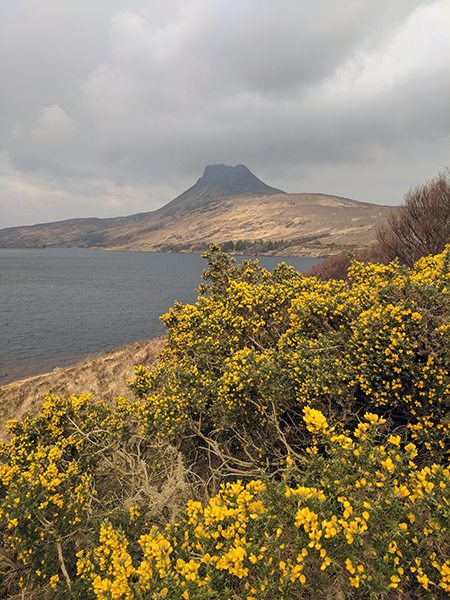 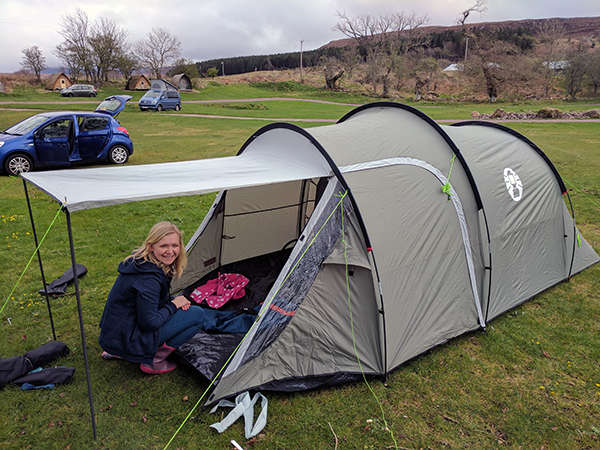 Eventually though, we did arrive at Applecross Campsite. Situated just above the village, it’s a relatively sheltered site, considering it’s on the coast, with good facilities on-site, catering for Tents & Campervans – they also have Huts for rent – and easy access to local amenities and the beach. Very friendly staff too, who are quite happy to impart their knowledge of the area for you.

After pitching our new 3 man tent, we spent the rest of the day exploring Applecross – it’s not a very big village, but there is a wonderful pub just down from the campsite (Applecross Inn), the beach is great for walks (though it is quite a rocky beach), and there’s a community run Petrol point with incredibly competitive prices too.

Instead of cooking on our Gas stove, we decided to eat at the Pub in the evening; Asia having delectable Scallops while I feasted on one of the biggest and best Fish pies ever! The pub seemed very popular amongst locals and tourists alike – not hard to see why, after the grub they dished up.

We were all pretty pooped by the time we hit the sack, and our fist night spent in our new tent passed quite uneventfully.

Saturday morning was cloudy but bright, with a chill in the air that only the Atlantic could provide. After a warm breakfast cooked on our Camping stove, it was time to head off. Our destination today was Ullapool, a place pretty close to our Hearts, as it’s where me and Asia met, and got Married. But first we had a 3 1/2 hour drive to get there!

Our route today took us up through Shieldaig, Torridon & Gairloch, eventually hitting the A835 for the final stretch. The drive is spectacular, all along the Coast. It seems like the view around every corner just gets better and better – unexplored bays & beaches, quaint villages, islands, and peaks just begging to be climbed, you could spend an entire week travelling up just this part of the 500.

We did stop at several points along the way, most notably: 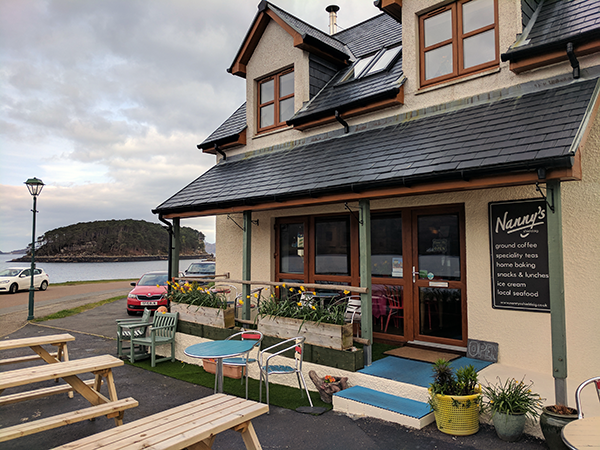 Nanny’s Tea Store – In Sheildaig, this is a must experience. It’s the first real place to stop and relax after leaving Applecross. On the banks of Loch Shieldaig, with seating outside and in, they serve a great Hot chocolate, and have a scrumptious selection of home-made cakes as well.

Gruinard Beach – While not the biggest beach in the world, the white sands are wonderfully inviting, and the views are outstanding. We spent almost an hour building Sandcastles here, as the weather was lovely. 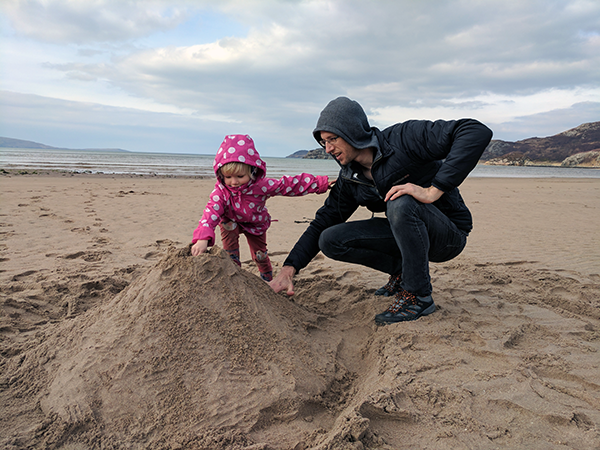 It was late afternoon by the time we arrived in Ullapool. We’d been hoping to camp at the local campsite, but it unfortunately (and weirdly) wasn’t open for the season yet. It was at this point we met Grant and his family, also doing the 500 in a Campervan, and also stuck without a campsite for the night. Luckily Ardmair Campsite was already open, so we travelled the 5 miles further North, pitched, and then got a lift with Grant back to Ullapool for dinner.

We used to work at the Seaforth Pub, while it was still privately owned by Harry & Brigitte Macrae, but since they sold it it’s gone downhill a little, so instead we decided on the Arch Inn, just down the Beachfront. They’re a family-friendly pub serving a good selection of Pub food / Seafood, and there’s a great atmosphere as well.

It was so good seeing so many old friends and acquaintances again, but all good things must come to an end. Dinner finished, and a few beers later, it was time to catch a taxi back to Ardmair, and another restful night’s sleep.

Our plan for Sunday was to travel up to Durness and spend the night there. Unfortunately the morning arrived Windy and with the threat of rain in the air, and it only got worse from there. By the time we’d made it up to Lochinver it was raining buckets, and the forecast was pretty poor.

Over a light lunch at the Caberfeidh (Soup and a Sandwich) we made the choice to skip Durness and head back cross-country to Inverness for the night. 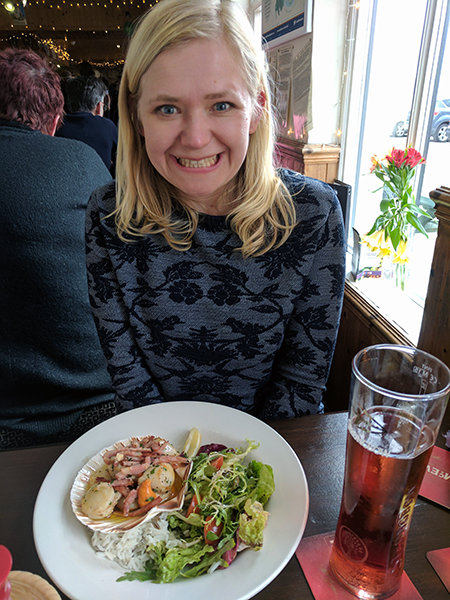 We took the A837 all the way across to Bonar Bridge – the road is stunning, through the heart of the real Highlands. The highlight was most definitely the Golden Eagle we came across, sitting on a fence on the side of the road. What a magnificent creature!

With no stops along the way, we got back to Inverness in good time, spending the night at our friend’s again, before heading back to Aberdeen early on Monday. The North Coast 500 is a trip most definitely worth taking; the opportunity to explore one of the least travelled areas of Scotland, and one of the most unique regions in Europe, is one not to be passed up.

Fair warning though – Summer time in the highlands is Midge time. These little creatures will suck you dry, so best be prepared!